Send me a trade offer: https://steamcommunity.com/tradeoffer/new/?partner=66050217&token=ZMA7Oprc

What do you mean by glinks?

Sorry, I'm looking for quite a bit more on this one since it includes several discontinued games.

Well its ur mentioned price or its amount of keys u H?

Edit: Oh, yes, sorry about that, I misread your offer before.

Hehe i just posted what i see :D if its 8 not rlly interested, but thanks anyway 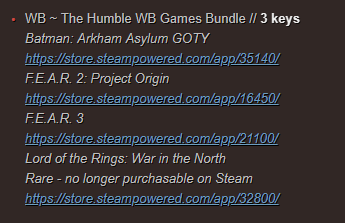 Sorry, I somehow thought you were asking about a different bundle.

Thanks! Pleasure doing business with you :)

I'm interested in Trine 2 and 3 as well as Tabletop Simulator. I have TF2 Keys and some old items that I have no idea if you'd want.

Sure thing, let me add you so we can discuss it :)

maybe
Space Rangers // anything not sure if i have this

heya, looking for these. perhaps we can sort something out? able to do a bit of discount?

Not into it, I'm looking purely for items. Thank you for your offer though.

Will you trade rayman origins steam gift?
And how many keys for it?

This one isn't tradable, it's a gift for a friend :)

Hey, thanks for the offer. Unfortunately that's quite a bit lower than my other Telltale copies went for. Are you able to offer more? Feel free to add me for further discussion :)

Items only please. I'll add you so let's see if we can figure something out :)

Hey, sorry for the late reply. I was off desktop for a few days. Would you be able to add like one Tour of Duty Ticket to it?

I'm interested in your Test Drive: Ferrari Racing Legends, what is your price in CSGO keys?
I suppose that 4 keys are for TF2 keys.

Hey, I'm already on the lowest price on this one plus it's my last copy left. I'd be able to go lower on this one only with a bulk deal :)

I understand, i've added you to discuss and complete the trade.

Thank you for the trade, it's been a pleasure :)

hello. you have a game that i want! please have a look at my leftover games, d.l.c. and subscription services. if you want to negotiate a fair exchange, just talk to me about it. thanks for your time.

Hey, thank you for your offer, but I'm looking purely for items.

Hey, can you offer some items instead? I'm currently not looking for more games :3

Unfortunately the only item of value I currently own is a Spyro emoticon, but it becomes tradable on the 29th. :( Well, thank you for replaying at least. Have a nice day. :)

Oh well, thank you for the offer though :) Have a good one as well :)

Anything for Organ Trail?

Hey, thanks for the offer. I'm looking to trade the whole bundle, not just the individual game. Would you be able to give me an item (csgo / tf2) offer on the bundle instead?

I want: Super Meat Boy :D
i sent friend request, so thanks if you answer in steam chat(not here:D)

I see, added and trade offer sent. Thank you :)

Hello, thank you for your offer, but I'm looking purely for csgo or tf2 items. Can you make a such offer instead? :)

Hey, sorry, not looking for any of those. Can you do items? :3

Hey, I can be flexible on bulk deals. Let me add you to talk :)